Renault's "return to China" and Geely's "going to sea" 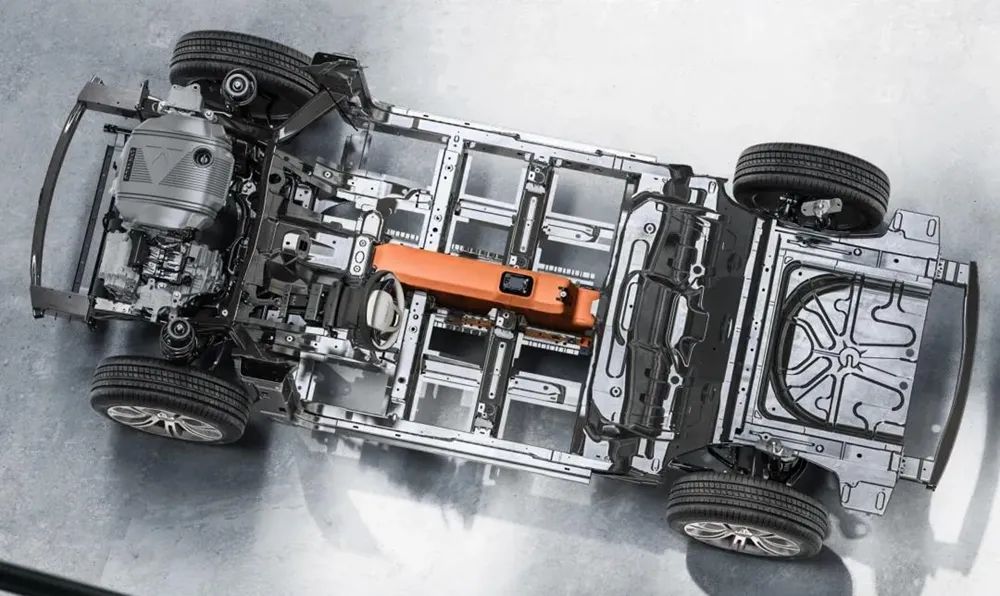 8 month 9 Japan , Renault group and Geely Holding Group jointly announced the establishment of a cooperative relationship , Both sides aim at the hybrid market in Asia , In the future, we will focus on the Chinese and Korean markets , Launch based on link CMA New models for architecture development . This means that Renault will return to China , Re entering the Chinese passenger car market with Renault brand hybrid models , Geely will also export... To South Korea CMA framework , take “ Geely gene ” Into the Korean market .

Nowadays, the attention of foreign brands on how to layout the Chinese market is giving way to how Chinese brands go to sea .

Geely and great wall are fighting fiercely in the domestic market in the global market , In Great Wall Motors just released 7 Monthly sales , For the first time, the proportion of its overseas sales exceeded 10%, More than 10000 ; At its overseas dealer conference held yesterday , Its layout has penetrated into the Middle East 、 Africa 、 Russia and South America .


And on the same day , Geely is also the next city in its international territory , meanwhile Renault has found a way to return to China's fuel passenger car market .

Enter the Korean market with the best of both worlds .

Unlike Great Wall Motors , This Geely sea trip is a technical sea trip .

If we zoom in to the 40 years since the cultivation of China's automobile market to become large , In those days “ With the market in technology ” Once a national strategy , Forty years later , China's Mu Tu automobile has finally ushered in the reverse output of Technology .

Let's go back to the cooperation between Renault and Geely .

Its prequel begins with 2020 year 4 month , When Renault announced its departure from Dongfeng , Once caused a shock in the industry , A lot of people Have a question ： As a century old brand, does Renault really give up the Chinese market ？ 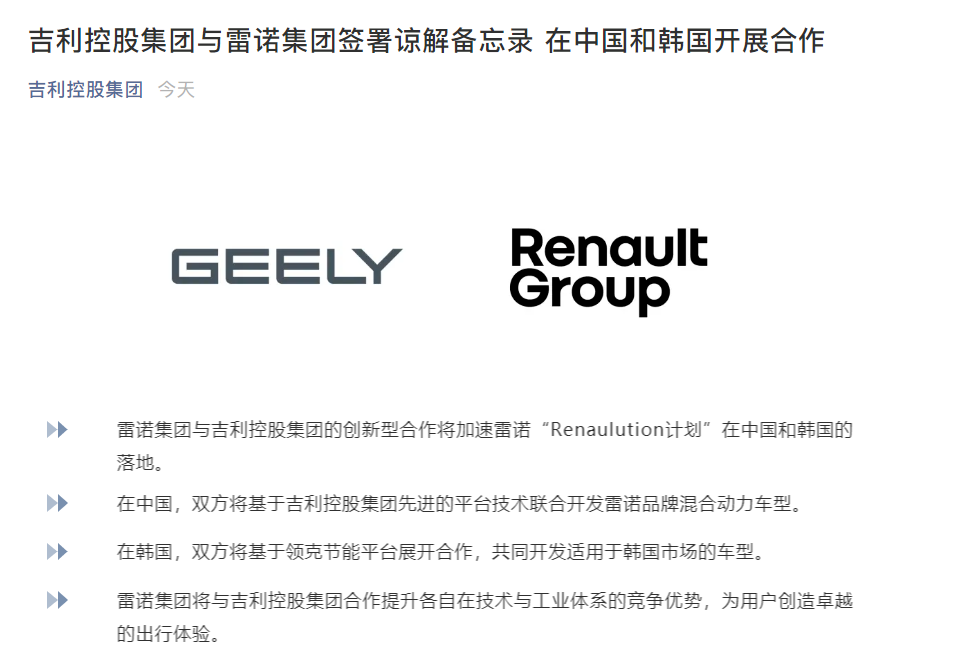 16 Months later 8 month 9 Japan , Renault joined hands with Geely to return to China , It can be said that we have found a win-win way to return .

First of all , Whether the first new car has a clear landing date ？

second , What channels will new cars be sold in the future ？

Third , Will we continue to introduce fuel and pure electric models in the future ？


Renault's representation ： At present, there is no information that can be released about when the first new car will land and what channels to sell , It will be released later according to the progress of the project ; As for the third question , The introduction of hybrid models is the first step of Renault's China strategy . 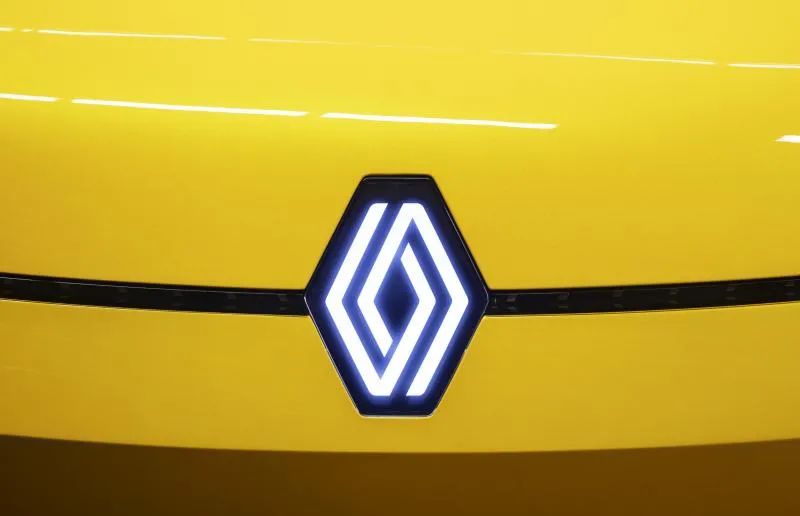 This gives Zhijia more reverie , Because according to previously published information , Renault plans to 2025 To be launched in 24 Products , At least 10 Pure electric vehicle . For the Chinese market , It will also develop models suitable for local brands . meanwhile , Renault will also cooperate with lutes to develop the next generation of electric sports car .

So the strategic in China “ First step ” After leaving , It is not impossible for Renault to strike while the iron is hot and expand its product line .

And at this stage , The most interesting issue in the cooperation between Renault and Geely is ： What can the two sides get from this cooperation ？ 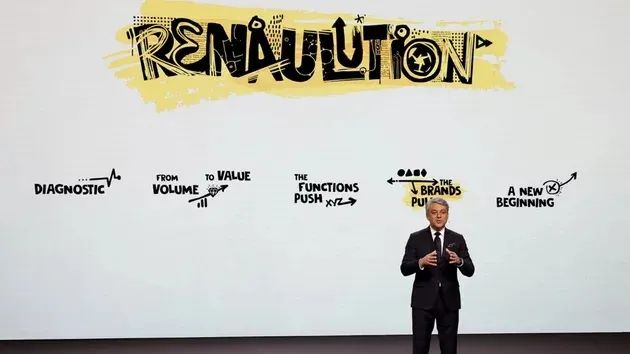 “Resurrection” Revival stage , From the date of publication to 2023 year , Focus on profitability and cash appreciation ;

“Renovation” Innovation stage , From the date of publication until 2025 year , Continuously update and enrich the product matrix , Improve brand profitability ;

Then cooperate with Geely to launch new models , Obviously, it has great advantages in cost control .

Led the g CMA Architecture is a mature platform , At present, it has derived a variety of products for Geely Group , For new energy technologies 、 The implementation of automatic driving technology and intelligent network technology has laid the foundation .

Even if it is calculated by Lingke brand , use CMA The sales volume of the architecture models is also close to 50 Thousands of cars .

Take the lead CMA Structure to build Renault's first product after its return to China , On the one hand, it saves a lot of R & D costs , On the other hand, it can also quickly obtain the product technology that has been verified by the market . It's a guarantee “ The first ” Market competitiveness of vehicle models , There are obvious benefits .

what's more , Renault decided to abandon China's fuel passenger car market , The reason is that the models sold by Renault in China no longer meet the new requirements of the Chinese market , Product power is out of touch with consumer demand , Caused a rapid decline in market competitiveness .

therefore , One of the keys for Renault to return to the Chinese market , That is, localization must be paid attention to .

Use link CMA Architecture to build Renault's new car , In terms of localization, we can rest easy .

Of course , In order to lead these strategies to complete the landing , Renault also needs a coach who understands the Chinese market .

This point , Renault this year 3 It has been implemented in January . 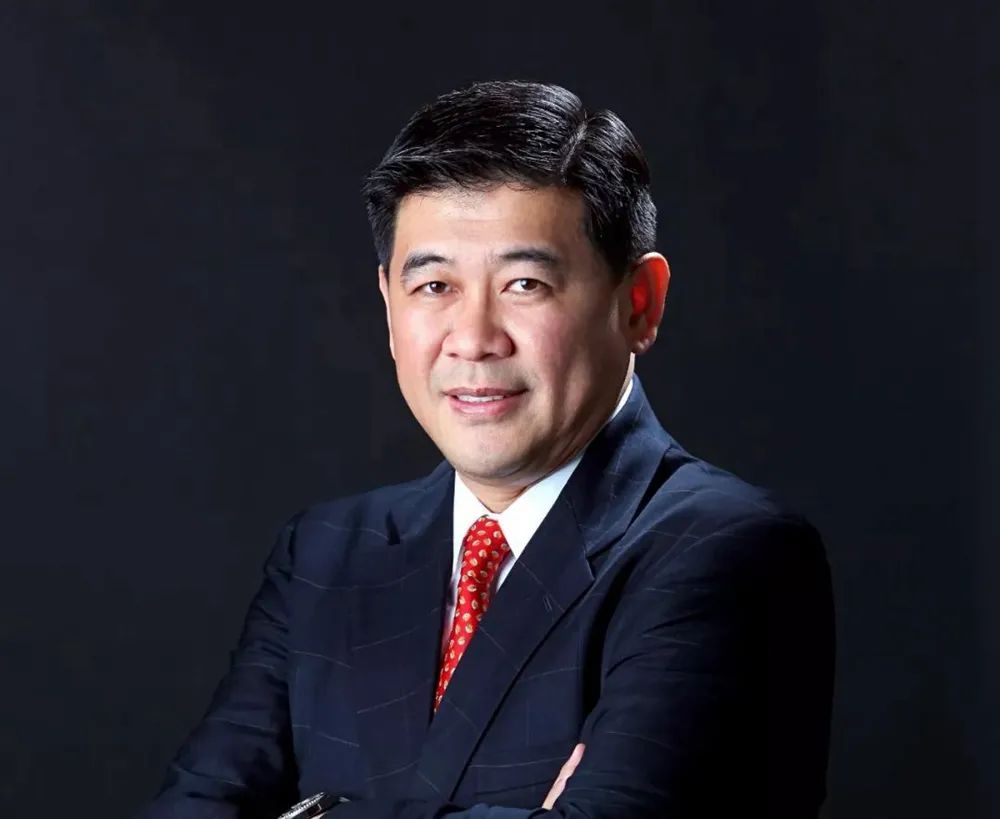 This has become Renault group to strengthen its strategic position in the Chinese market 、 The first step to return to China's passenger car market .

We can see from Su Weiming's resume , He runs a large car company 、 Zhilian service operation 、 He has rich experience in many fields such as new energy technology and Chinese market sales .

Luca, CEO of Renault group · Virtue · Mayo has said many times since taking office “ I hope to return to the Chinese market in a completely different way ”, Su Weiming took over the business of Renault in China , There is no doubt that it will be beneficial to Renault “ Return ” Bring a key driving role .

The cooperation with Geely has been reached , That's one example .

Geely Group won Volvo one after another 、 Lotus 、 After proton merged into Daimler , Its international vision is becoming more and more mature , Renault chose Geely to cooperate , There will also be better prospects .

But in terms of market performance , Brilliance Renault's performance is declining year by year , Jiangling Renault's first pure electric vehicle “ name of a master archer ” It is expected that it will not be listed until the end of this year .

At present, Renault is the only pure tram Renault sold in China e Promise , There is not much sense of presence in the car market . 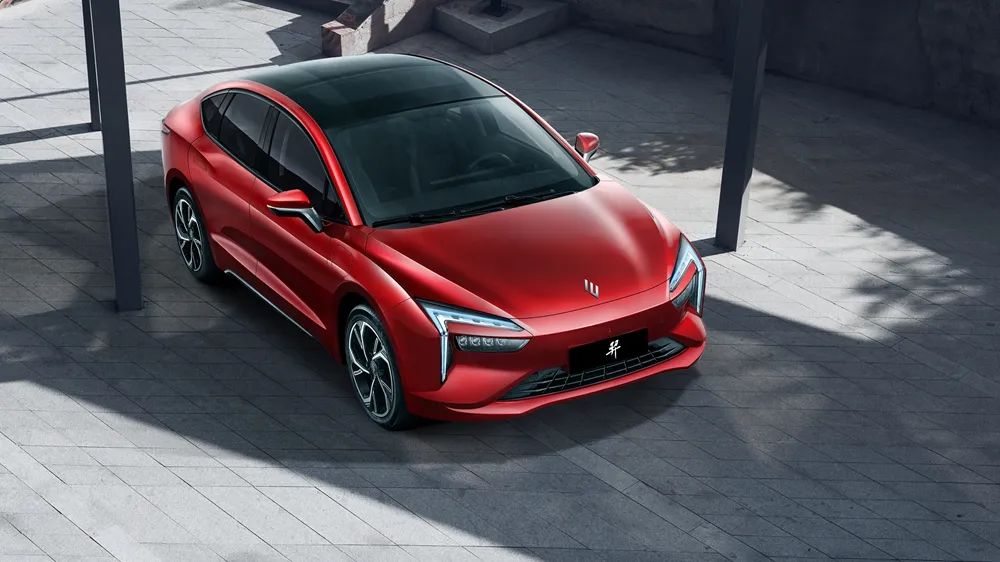 From the perspective of product planning , The hybrid model built by Renault and Geely will shoulder a very key market task . And choose to start with the hybrid market , It must also take into account that the competition in the hybrid market is not so fierce , The future market operation is also easier to start .

If you look at it from an auspicious point of view , Working with Renault will make CMA Architecture to achieve technical output , And can enter the Korean auto market .

Need to know , Renault Samsung has... In the Korean market 20 Years of development experience , The joint efforts of both sides will help to broaden Geely's international territory . 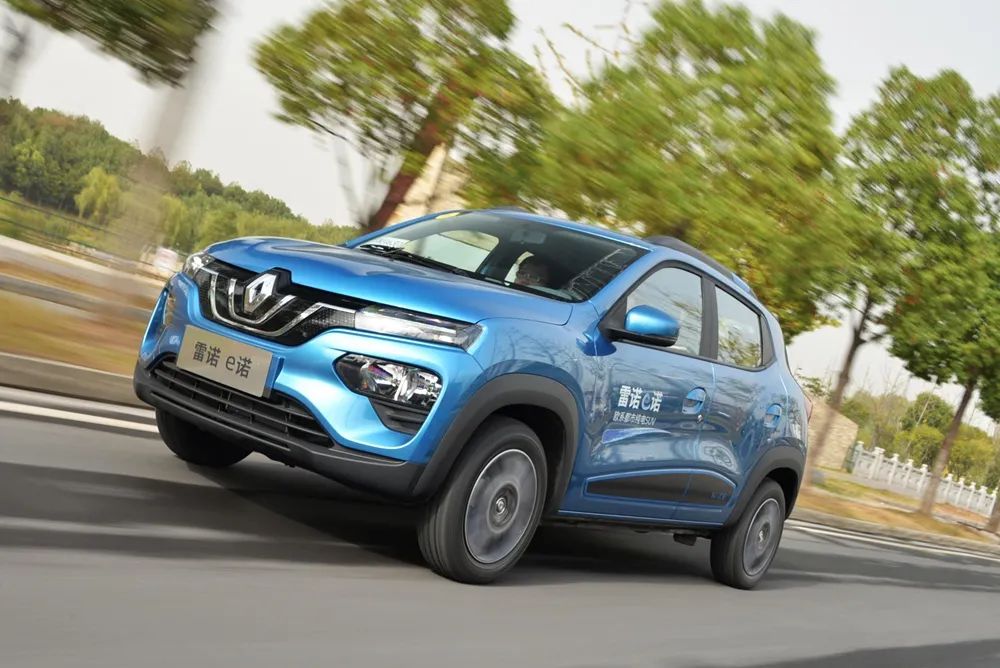 meanwhile , Renault as a century old brand , In automobile research and development 、 Rich experience in manufacturing and operation . These are for automobile groups like Geely that are interested in becoming international first-line brands , It is also of great value .

Predictably enough , In the process of cooperative research and development , Geely will undoubtedly draw a lot of valuable experience from Renault .

however , Renault and Geely will face many challenges . 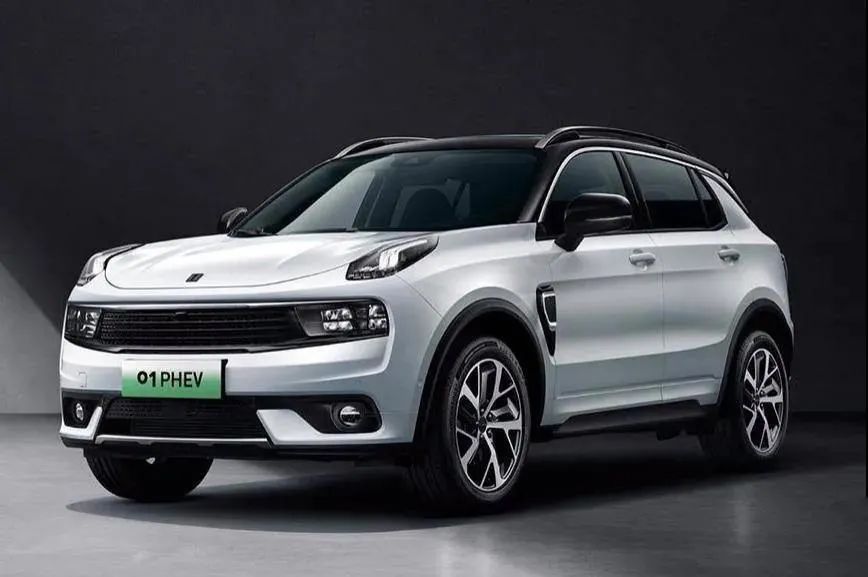 Before the new car developed by Renault and Geely landed , Renault's strategic focus in the Chinese market is still electric vehicles and light commercial vehicles , But its long-term plan is ： Reshaping the business model in China , Using assets in China , With the help of China's industrial ecosystem , Develop new mobile solutions for the Chinese and global markets .

In silence 16 Months later, , Renault returns to the sight of Chinese consumers in a new way .

Geely also got the opportunity to develop in the Korean market .


It is too early to say whether this is a historic opportunity , But it has undoubtedly created a new model for Chinese auto brands to go to sea .

How will the cooperation between Renault and Geely develop in the future , Zhijiajun will also continue to pay attention to .

【 Pay attention to Zhijia video Number , Focus on the frontier of intelligent driving 】

They say Versailles is good? Let's hear what the little sister says! 》